Siena and San Gimignano tour. Siena can be appreciated from Piazza del Campo, the heart of the city, with its original shell shape. The Palazzo Comunale, the Torre del Mangia, the Fonte Gaia and numerous monuments and palaces that we can admire in all their beauty overlook the square. Then we can visit the Duomo, the museums, the Church of Santa Caterina and the Medici Fortress. It is a city that has remained intact in its medieval splendor.
From the Tuscan city of Siena we will then move towards San Gimignano. Coming from the Tuscan hill we will suddenly see the shape of the village with its towers.

SAN GIMIGNANO
San Gimignano is a small town. It is one of the fundamental stages for tourists who want to keep a unique and suggestive experience in the baggage of their memories. It is the most characteristic of the Tuscan villages. In fact, with its imposing towers that dominate the landscape, which have remained miraculously intact over the centuries, it is particularly evocative. We can walk along the Via Francigena, or get lost in the narrow streets of the city, among the artisan shops and the delicious little places that fill the old town. Here, in the suggestive atmosphere of the historical center, we will be able to taste the most famous locally produced wine, the Vernaccia.

INFORMATION ON THE CITY

Siena is the city of art, history and culture. Like Florence, it has an Etruscan, Roman, Renaissance and Gothic past. The palaces, churches and squares of the old town testify to this glorious past with their monuments and finished facades.

Many museums, both in the city center and in the hills, among small villages and hamlets scattered in the Tuscan hinterland. On a cultural visit to Siena you can not miss historical places like Piazza del Campo with its Fonte Gaia and Torre del Mangia, the imposing Duomo, the Sanctuary of Santa Caterina, the Basilica of San Domenico, Palazzo Pubblico, the Museum of Opera, and many others.

THE HISTORICAL CENTER OF SAN GIMIGNANO

heritage of humanity, offers medieval masterpieces including the famous towers that still stand out on its landscape and which have earned it the definition of “Manhattan of the Middle Ages”. Of the 72 towers today there remain 16, the oldest is Torre Rognosa, 51 meters high, and the highest is Torre del Podestà of 54 m. The heart of the town is Piazza del Duomo, full of buildings and palaces such as Palazzo Vecchio del Podestà and the Palazzo Comunale also called Palazzo Nuovo and the Palazzo della Propositura, the headquarters of the Opera Archive with important 15th century manuscripts. The Duomo, on the other hand, preserves valuable works by great Tuscan artists. 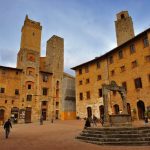 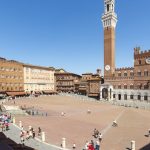 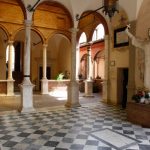 SEE ALL THE TOURS WE PROPOSE